My last job: "A Wall Street Bailout For Main Street".

Hello my friends.
Here you are one of my latest jobs.
In this case a cover for a Iris Mack's book.

You can buy it on Amazon at:

Which color combination choose for it? ( Modelled in 3DSMAX and rendered with Corona )

I'm thinking about the color for my character and here you are some variations in the color.

I love each one but my character needs a color NOW, because he wants to live the experiences that the book in which he will gonna take part as main character needs to be released as soon as possible.

Let's see which color do you think fits better for him!.

You can choose an option in my poll here or write answering in the answers section of this post:

It has been modelled in 3DSMAX and rendered with Corona.

And the colors are: 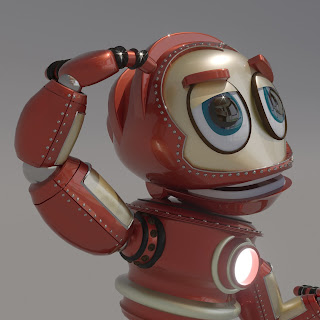 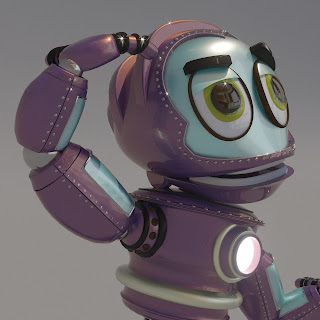 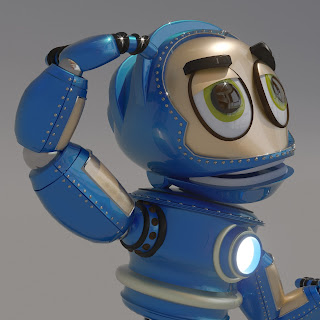 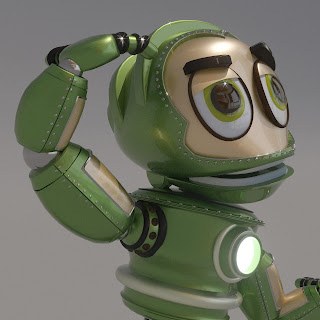 
Thank you in advance.

VR 360 project of a movie theatre in Los Angeles, California.

Here you are one of my latest projects, this time is a Virtual Reality with the Google 360 technology video for a project in L.A. (CA) in the USA.

The purpose of these kind of videos is the option to stop the video and look around you with clicking on it and dragging with your mouse or if you are watching it from a cellular phone, moving it or tapping with your finger.

You can play it again and again and see the evolution of the volume in each stage and step of the attenuation of the lighting.

I can change the color, temperature and intensity of each light and in this way, the client can see the evolution in each stage of the lighting showing the global volume in a different way.


It's curious because wrapping a cube with a render of 6 faces and inserting the camera inside this cube you have this ability.

Thanks to Google and its VR360 technology !!.

And thanks for watching it.
Published by joari71 at 12:26 No hay comentarios:

Hello!
And congrats to all of us who have supported the Donald Trump's campaign.
for those who couldn't support much more time the total disaster of the Obama administration and who want to restablish the things to its right place, CONGRATS!.
MAKE AMERICA GREAT AGAIN!.
God Bless America. 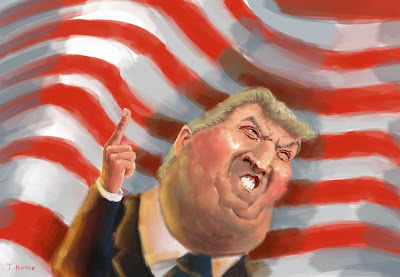 Here you are the Petrola's pool.
I've been a few days in my holydays and I decided to paint it. It's something rare to find a pool with such a so high concentration of salt into its water.
Over the years it has been used to feed the south of Spain' spas but for the last 10 years of so, the Petrola 's pool has been declared a natural reserve, finishing any type of human intervention.
Many bird species arrive here to Petrola and after months come out far away to the west of
Spain or other zones different than Spain. I will post something about this interesring migratory birds.
I hope you like it!. 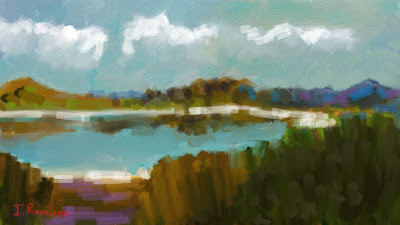 WAJAM Malware: how to disable

Did you get infected by wajam malware?. 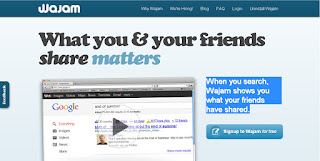 The most struggling which after making the two steps of before you notice that still your screen gets filled with advertisements on the top, on the bottom, in the middle and videos who assault your screen:

C).-Kill the processes (yes, you can have more than one running at the same time, trying to fill your web pages with advertisements immediatelly after you have closed them) which adopt different names to " wajam ". In my case were called: "YYQZBI":
Open your tasks administrator with CTRL+ALT+SUPR and search the processes called like this, remember:"YYQZBI".

And when you accomplish the third point, restart your computer.

I hope this help you.

Here you are my latest job, which you can find at the Amazon's store for books, Kindle Amazon: it's a set of illustrations for a book written by Christine Smith. This book tells the story of something amazing which happens in a ranch full of happy and funny animals who live there and it's titled " Plumpty Wodle " 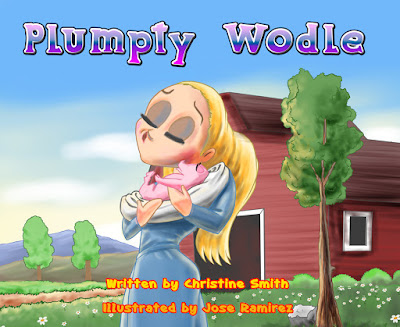 This will be a banner which promotes the defence and care of #stray #dogs and cats. this could be a good idea, what do you think?. 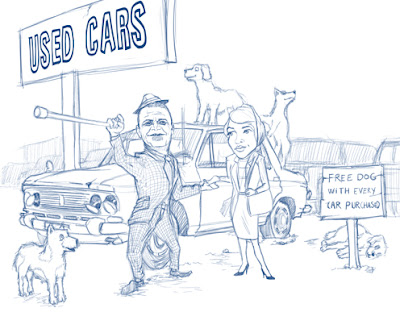 And this is the finishied illustration: 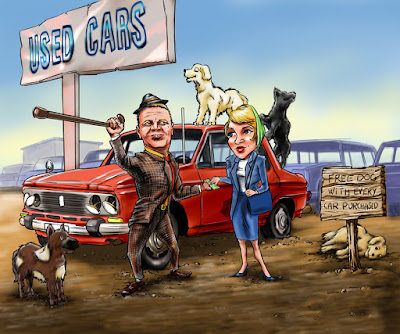 Bernie Sanders in my next comic strip

Last sunday I drew a simple with physical pencil sketch of Bernie Sanders, for my next comic strip. 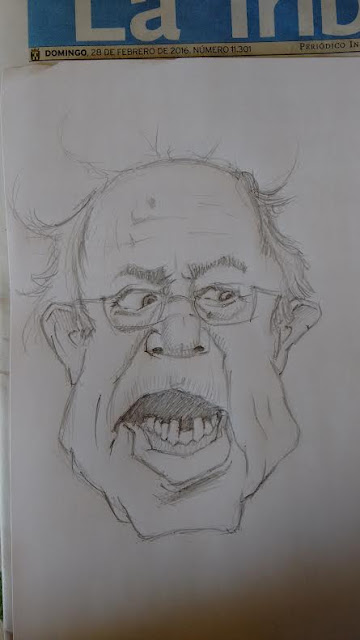 Regards.
Published by joari71 at 13:34 No hay comentarios:

Another commissioned job, this time for a children's book...

This is a new release children book I'm illustrating  for a former client.

The illustrations must be simple and with plain color...But they always must have a good sketch behind.  :) 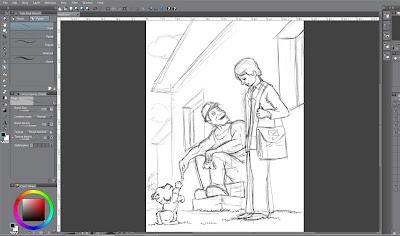 This is a piece of  a commissioned artwork for a client in the USA. 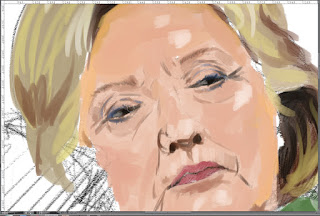 You will see soon the final artwork.

Sketch of an illustration of new book of cute puppies...

This is a sketch of the new book I'm illustrating right now which will be sold via Amazon.

I'd love to have ready before Christmas!.

Kind regards and I wish you Merry Christmas! 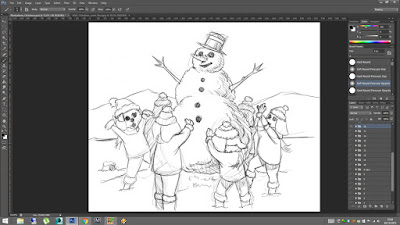 My last illustration: A Tail of Two Kitties!

This is another cover for Dr. Dilland Doe called: "A Tail Of Two Kitties" for Kindle /
Amazon version. 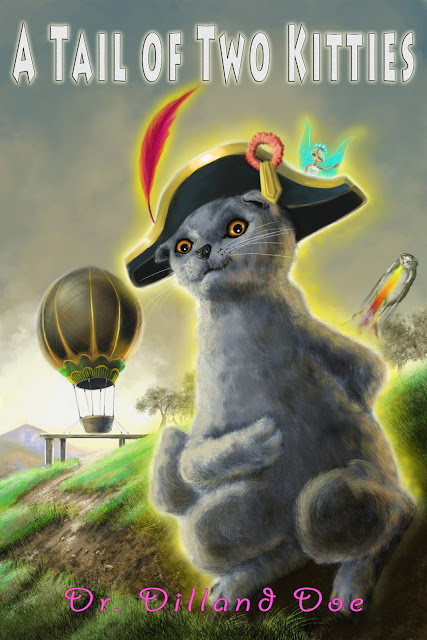 Again lots of fantasy and fun when I painted this one and much more inside the book.

What are you waiting for to buy yours?. :)

Regards.
Published by joari71 at 8:55 No hay comentarios:

Hello. This is the starting phase of my latest cover, for the book with the title: "The Forbidden Heritage", of Misty Griffin.

It tells a story of an Amish girl who has a secret, hidden long time ago.

This will be soon sold in Amazon.

I will update the evolution of the cover. 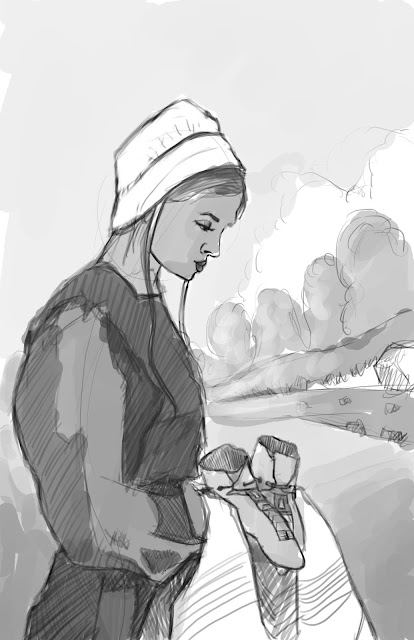 My latest illustration: GRUNCHIN! . You can buy its book at Amazon 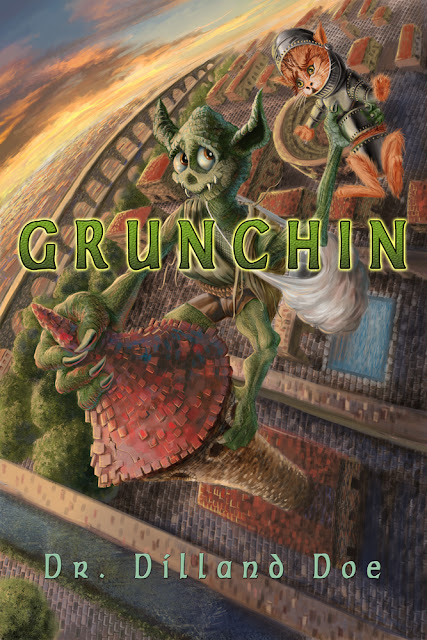 I'm proud to present you one of them: the cover of "Grunchin". A funny goblin who lives intrepid adventures in a world full of fantasy.

Here you are the link to book which you can buy at Amazon:

I enjoyed a lot painting it because of how much fantasy is condensed in only one illustration.

For me has been a pleasure do this and in some way I think this illustration transmits it.

In other words: I've been happy painting it!.

Best regards.
Published by joari71 at 14:39 No hay comentarios: 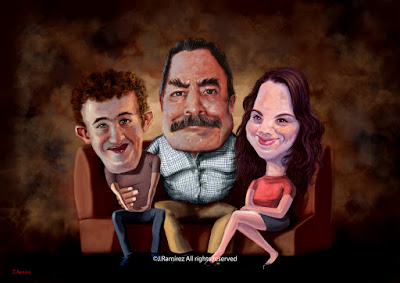 This is comissioned job for a client.

Published by joari71 at 0:33 No hay comentarios: 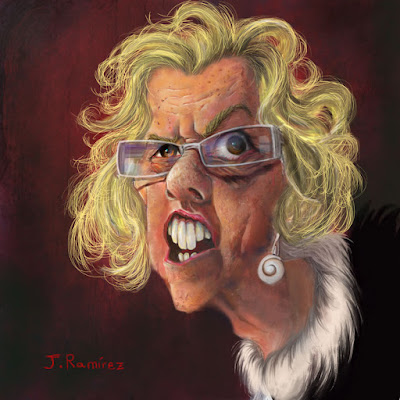 And this is the turn of #Manuela, #Manuela #Carmena.

It was painted with #iPad #Retina and #Procreate, the best combination in my opinion for #iPad #Mini.

She's the new major of #Madrid, capital of Spain and as all her mates, comes with the craziest and most neocomunist ideas you can imagine.

One of the last is the publishing in an official website of which media is telling the truth and which one not.

But always figure out the uncontrolable rising of all the taxes, one of their favourites is the tax for the tourism, the most important resource of incomings for Madrid and Spain.

How could a neocomunist arrive to the government of one of the most important cities in Europe?. It's a mistery.

Because some ideas as the creation of a new currency to avoid the Euro and the limit of the budget in order to control the deficit always are kept in mind by people like Manuela Carmona. the subjacent idea of spend spend spend money (which is not theirs) with the excuse of a "social coverage" is the most pathetic thing you can hear because this always cause unemployment, due to the rise of taxes and the sinking of the investement and potential consumers.

Believe me if I tell you that a major like her can ruine millions of lifes in a city and the others which are located around it.

They will never understand that themost important is decrease the taxes and leave the economy flows.

But in country where it's forbiden pronounce the word "libertarian" ...What can you expect?. Our destiny is the complete ruine, as the greeks or argentinians has tasted coming from these neocomunist ideas,

God bless us and good luck.

Regards.
Published by joari71 at 19:31 No hay comentarios: 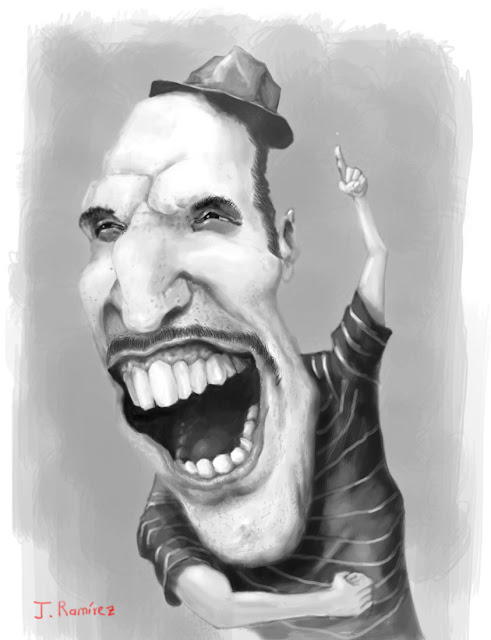 Varoufakis the Rocketeer and the Grexit

This is Varoufakis and his final:

This is what happens when an economics minister has no idea of what economy means. It's usual among the leftist economists but in this case it's the most representative of all them, friend of Paul Krugman, as you could imagine.

The best he could do was go out as soon as possible and leave rest the greek people.

The problem still remains because Syriza and Tsipras don't guarantee anything.

Greece has been saved from bankruptcy three times and it means a failed policy from Europe, who don't know how to make the measures to be accomplished in order to rescue definitelly Greece.

Varoufakis and Siryza sank Greece into this hole from where they can't go out with a complete libertarian measures and a serious control of the budget and deficit.

Anyway, these persons like Varoufakis, who always seem to be ready to enter in a disco, have their lifes solved forever. He won't sufer any issue or "corralito". Who knows where his money is...

I wouldn't give greek people more money if we don't take the control of all the country economy  until the recovery would have become.

Have a good trip Varoufakis and we hope never see you again... 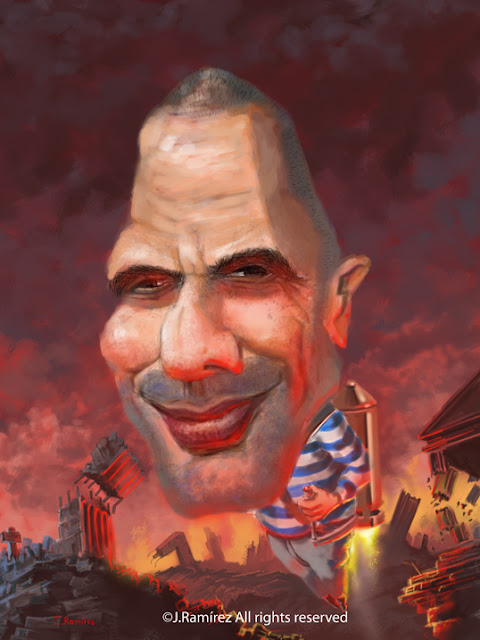 Well, so here you are my last illustration : Nicolas Maduro, one of the latest dictators , the best representation of the ultra-leftists and the neocommies which have ruined latin america. 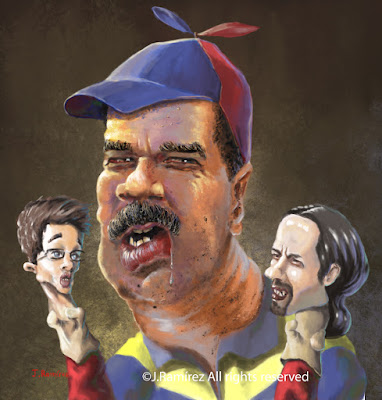 But what I want to express here is how he has spent the money of venezolan people supporting the ultraleftist Spanish party " Podemos ", with millionary contracts of "advices".

The left one is Íñigo Errejón and the right oine is Pablo Iglesias, #2 and #1 respectively of Podemos , the Spanish political party.

These people has hate hate and overall a total unknown of the minimum concepts of economy.

They don't want the pivate property for the rest but for they, the leaders.

The cause the most horrible fears among the international and national inverstors. The model of the bolivarian republic installed in Venezuela is projecting shadows over Spain.

Within only 6 months we will know wether Podemos has something to say or not in the Spanish politics.

Pablo Iglesias is a radical and violent leader without no idea of economics. And Iñigo Errejon is a young boy with less idea than his leader at anything. Is people who wants for the rest what they don't want for them: the tipycal commies.

Corruption, unemployment and the continuous leftist policies by leftist governments and (supposed) conservative government of Mariano Rajoy has arised so high that has become unsupportable to resist a TV news program fully filled of corruption news one behind the other and again and again.

People desperately believe in Pablo Iglesias and Iñigo Errejon, as if they were some kind of messiahs...And the only will take Spain HATE, HATE and more ruin, over the actual debries.

In my opinion, as a party who is self-called "anti-system", they should be declared illegal and finish it.
Published by joari71 at 10:22 No hay comentarios:

Do you need an illustration?

What are you waiting for?. Please ask me what do you want I paint for you at: jorari71@gmail.com and I will answer you as soon as possible.

Pics of the blog

Blogs of my friends